Security cameras are very popular for home security systems. Several studies have shown that security cameras do a wonderful job of deterring crime and can be a valuable source of evidence when a crime is committed. Simply the sight of a security camera can completely deter criminals as they will feel more likely to get caught.

Here is the trick though, it doesn’t have to be a real security camera!

The Techage is our top choice because of its good quality. It looks like a real camera and also comes with a second to complete the picture. The solar panels actually work and charge the batteries used to power the LED.

It can be used either indoors or outdoors, though it is designed for outdoor use.

Our top pick for the best fake security camera is the Techage Security Detection Floodlight on account of its robust appearance, features, and overall quality/durable.

The Techage has a realistic appearance and several features that add to the appearance, including a ring of LED floodlights, black plastic and a functioning solar panel. 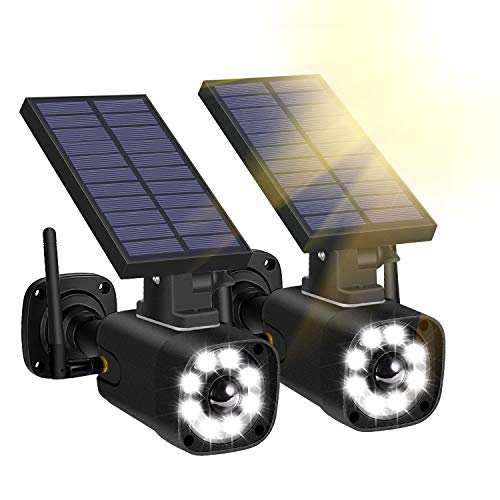 The Techage is one of the best dummy security camera systems on the market. Not only does it look like a real solar powered camera, but it also has a bunch of extra features to complete the illusion.

The Techage uses motion sensors to move when it detects someone in its range and contains a ring of bright LEDs for realism’s sake.

The solid black color is realistic and the dummy cameras are rated IP66 waterproof, so you will never have to worry about rain damage.

One unique feature is that the solar panels recharge the LED batteries. This function gives the appearance of continual power and monitoring.

A downside we will notice is that there are no fake wires, though you can easily put those on yourself if you want.

This fake security camera has a classic come appearance and is super easy to set up and install. This dummy security camera can be attached to virtually any surface to give the appearance of monitoring. This camera is made from a durable ABS plastic and is powered by 2 regular AA batteries (not included).

This dummy camera also contains a small red LED that periodically blinks. It is a competent false security camera that is also very affordable.

This camera is one of the more simple ones on our list and is very affordable. It can be installed anywhere but looks most natural on a ceiling or wall. The dome design is convenient because you do not have to add any fake wires to complete the illusion. One downside is that the camera does not have any motion-sensing capacities.

This fake security camera, like our last entry, is more on the budget side of things. But it manages to have some good features that make it a passable fake security camera. This camera is made from a durable ABS plastic and features a realistic-looking lens. It also has a slide mechanism on the top that can be positioned to give the illusion of monitoring. The lens contains a ring of LED floodlights that periodically switch on and off.

This camera has an effective wall-mounted design and a useful 360-degree swivel. It can be installed easily and come with a fake wire attached to the back that makes it look like the camera is mounted into the wall.

The unit runs on 2 AA batteries. One thing we do not like is the fake brand name on the side, but this can be covered up if you want. 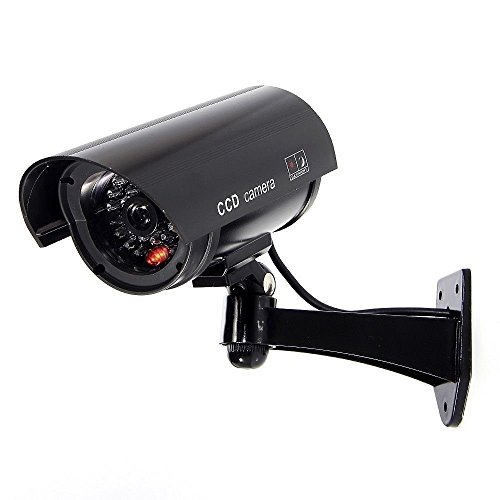 This camera has won our choice for the most durable fake security camera. This fake camera is made from an extremely tough ABS plastic and has a convenient and realistic wall-mounted design. This camera features an LED floodlight ring in the main lens and a fake wire protruding out of the back into the wall. This camera is powered using 2 AA batteries.

This camera is tough enough to be used outdoors and will stand up to any weather condition without breaking.

This fake security camera has a 360-degree swivel mount and can be positioned however you want. 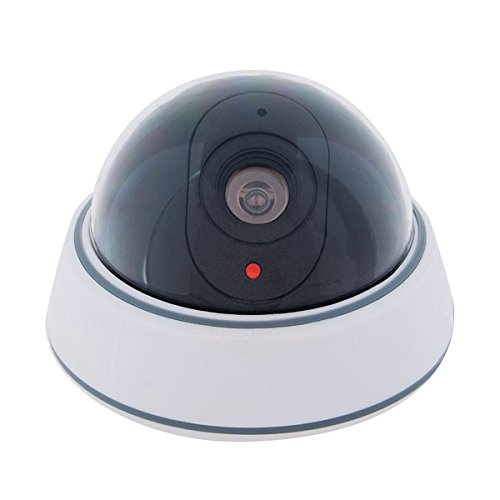 This fake security camera gets our pick for the best dome security camera. It can be attached to virtually any surface and features a bright red LED in the center under the lens. This camera has a sleek modern look and will do a good job blending in and looking natural with the rest of your house.

This security camera features a powerful sodium bulb that is bright but low-profile and realistic. The professional appearance is a nice touch and it can be used either outdoors or indoors.

One downside is that the Saber is not waterproof, but it can be installed on any surface very easily without any tools.

When Should I Use a Fake Security Camera?

So, dummy cameras are very useful in any environment where security is needed. One great example is in retail environments. Real and fake cameras can be installed around the entire store to give the appearance that everything is being monitored. The upshot is that with dummy cameras, you can do this for a fraction of the price.

Fake cameras are also commonly used in homes where they are inexpensive and easy to install. A dummy camera can be placed outside the home to discourage break-ins and thefts. If people think that your house is being monitored by a security camera, they will be much less likely to try and break-ins. Simply believing they are being observed can change a person’s behavior. Many homeowners combine dummy cameras with an alarm system.

Dummy security cameras are a good idea for a lot of situations, but if you have very high security needs, then you should probably opt for a real CCTV system. For instance, if you store a lot of different types of valuables in your home like jewelry, art, etc., then a real security camera system might be a good purchase.

Wires: If you go with a standard box-style camera, then you will want to make sure you have some fake wires coming out of the back into the wall. These kinds of cameras are usually hardwired into your power grip, so criminals will know it’s a fake if they do not see any wires. Box cameras without wires definitely look suspicious and fake. If a dummy camera does not come with wires, you can always put some on yourself.

A low-profile relatively dim monitoring light is ideal as that looks realistic and not contrived.

Markings/materials: Ideally, you should try to grab a fake camera that is designed like a real retail version. Materials, colors, and construction should model the real thing as closely as possible. For example, most security cameras are neutral whites, grays, and black, so you will not want to get a bright purple dummy camera or something similarly unrealistic. You should also avoid false brand names, as those can be checked to see if they are fake or not.

Other features: Dummy cameras might have other features that contribute to the illusion. For example, some dummy cameras have motion sensors and will move when someone walks by. Overall, you want something that looks realistic. Some dummy cameras are obviously fake and can actually work against you as criminals will be able to point them out.

Fake security cameras are a nifty and unique solution to security. Although they cannot record like real cameras, they can provide a sense of security and deter crimes of opportunity.

Dummy cameras can look exactly like the real thing and can have extra features to contribute to the illusion. Combining dummy cameras with real cameras can be a valid security solution.

Links to affiliate products help us by earning commission on sales, without costing you a cent! More Details