In general terms, a home security surveillance system is a great way to keep an eye on your property while you are away for work or travel. These systems can also be an efficient method of keeping watch over the people within your home, be they childcare workers or the children themselves.

In any case, installing a surveillance video system in your home comes with some legal caveats. With laws and regulations at the federal, state, and local level, you must ensure that your prospective video surveillance system is in full compliance or else you risk liability for illegally recording an individual without their consent.

Before you commit to installing even a single at-home surveillance camera, be sure to review the following laws and regulations governing their use. By following these laws on surveillance cameras use at home, you can ensure that your new surveillance system is functionally and legally operational, day in and day out.

Please note: We are not qualified to give you legal advice. This article is intended as a guide only and you should always consult a qualified law professional prior to installing CCTV at your home.

With several exceptions, most state and local jurisdictions do not prohibit the use of “hidden cameras” (such as video surveillance systems) within your own home. In the same vein, federal regulations do not prohibit use of in-home video recording devices outright. As such, some homeowners choose to install such cameras to survey a variety of factors from afar, with everything from personal possessions to pets included.

That being said, homeowners do not have free reign to place video recording devices wherever they choose. Many state laws prohibit camera installation in locations where a standard “expectation of privacy” is usually maintained.

While many modern surveillance systems record both video and audio simultaneously, their treatment under the law is not equal. In fact, there are far more state and federal laws detailing how citizens may secretly record audio in their home.

For example, some states such as Illinois, Florida, California, and more, require “two-party consent” for audio recordings. By definition, this means that both parties (or all parties, in the case of a larger group) must consent to having their voices recorded from the time the recording is initiated. In some cases, this legal standard extends to private homes, wherein non-consenting private citizens cannot be recorded without their permission.

There are also several special-use audio and video recording devices that are starting to pick up popularity. They require special distinction in the discussion regarding surveillance camera laws because they are often placed in unexpected locations that go beyond the traditional “hidden” standard.

For example, doorbell and peephole cameras are becoming increasingly popular as family’s adapt their home for interconnected smart technologies. These types of cameras are legal so long as they are focused on monitoring a homeowner’s exterior property. However, these cameras may fall into a legal grey area if they are used for surveillance beyond a home’s front door.

Also, so-called “nanny cams” fall into this category due to their prominent use to survey in-home child care workers while the homeowners are away at work. In one-party consent states, these cameras may be legally placed without informing the surveyed party. However, in two-party consent states, the “nanny” in question must be informed of the camera’s presence. Of course, laws regarding “reasonable expectations of privacy” still apply to hidden “nanny cams”.

Because of the sensitivity surrounding consent to video and audio surveillance, different state and local jurisdictions tend to employ varied surveillance laws. For an average citizen, these laws and their implications can be challenging to understand on their own. As such, you should always meet with an attorney who specializes in this field of law before completing your home surveillance installation process.

While meeting with this type of legal authority, you should discuss where you plan to place your surveillance devices (including those hidden and in plain view). During this process, they can provide input about whether or not a particular placement may run into legal trouble down the road (such as being too close to a “private” space).

Additionally, you should take time during this legal meeting to discuss how you intend to use recordings from these surveillance devices. While private individuals can generally use these recordings to meet their needs (which primarily include home security), they cannot use them with “malicious intent” (which includes blackmail).

The majority of US states maintain one-party consent recording laws, which state that at least one present party (usually the person making the recording) must consent to the recording’s initiation.

That being said, some states require two (or more) parties to consent to a recording, even within a private home.

Can I record phone calls in my home as part of my surveillance system?

Phone call audio recording is often covered under its own special legal standards. Generally speaking, federal and state laws prohibit this type of recording unless both parties on the call have consented (with exceptions made to law officials with a proper warrant). As such, phone call recordings should be avoided as part of a whole home surveillance system.

In the context of home surveillance recordings, a “reasonable expectation of privacy” can be described as a setting or scenario where an individual or group would generally assume that they are not being observed by an outside individual. While case law in individual jurisdictions may set varying precedents regarding this standard, it is generally understood to include bathrooms, bedrooms, and any auxiliary area where individuals may change clothes.

What can home surveillance camera recordings be used for?

Generally speaking, video footage and audio recordings can be used as evidence in court so long as they are “admissible” under situational criteria. While these standards vary from one jurisdiction to another, they tend to rely on factors such as authenticity, originality, and expectations of reasonable privacy. Such evidence can be crucial, especially in proving an in-home crime that occurred without witnesses.

Outside of legal proceedings, surveillance video footage, in particular, may be used to prove an insurance claim resulting from burglary. This includes the theft of items physically outside your home, such as mail or packages left on your doorstep. 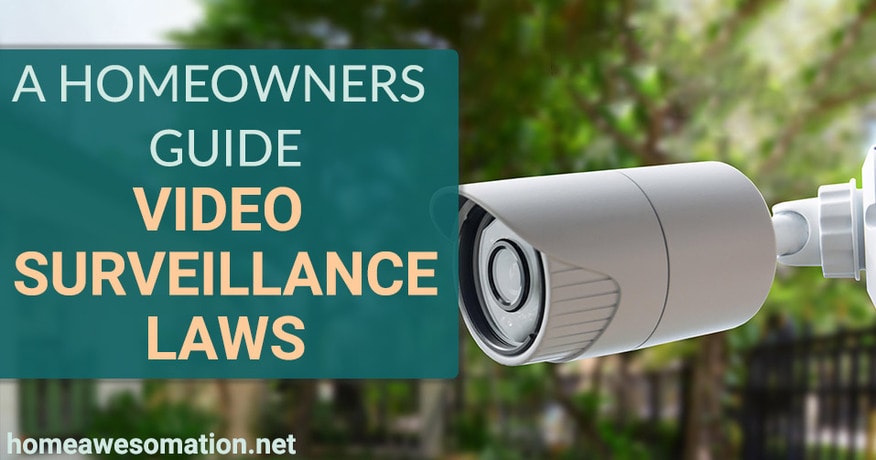